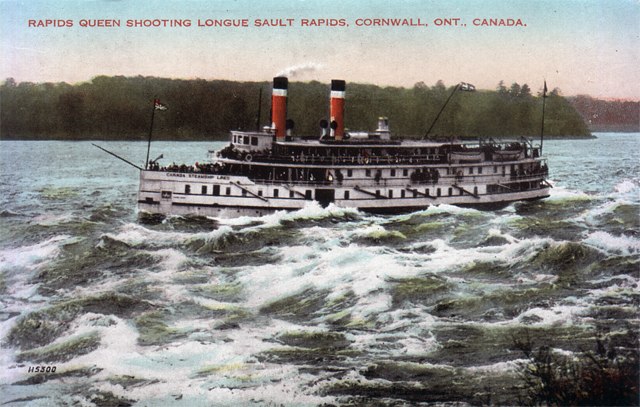 Card caption: “The Cornwall ship canal parallels the Long Sault Rapids and Canadian Highway No 2. Barnhart Island beyond the rapids will be partly submerged by raising the water level 80 feet. This development will provide over 2 million horse power and a passage for ocean-going ships of 27 foot draft through the Great Lakes. One of the finest recreational areas in U.S. or Canada will be a by-product of this development.”

A rare view of the Long Sault Rapids in winter.

Memory Shared: I count myself lucky to have seen the rapids at Long Sault. What I remember most was

the roar of the water. They were very noisy. The air turbulence above the rapids was know to

break up storms approaching from the south. by L. Worrall

The "Empire State" in the Long Sault Rapids near Cornwall.

Patriotic card featuring a ship in the Long Sault Rapids.

"Near Cornwall" would mean about 100km downstream, a significant distance back then.

The rapids at Lachine are still there.

The message on this card (next) gives an interesting glimpse into someone’s trip on the Rapids Prince in July 1945.

“At this moment I’m riding on this boat. I’m mailing your letters on board ship, no less,

so you may get them via Mass. [Massachusetts]

Last night, as you guessed, I didn’t sleep, but I’m still a good sailor - know what I mean!

You should feel the boat rock as we go through the rapids.”

Passengers carrying suitcases are ready to Board the Rapids Prince.

There were three ships who took their name for traveling the rapids at Lachine and Long Sault:

So glad to get yr letter and to hear you were both well. Everything is O.K. here. P.O. doing a big business. I am so glad you decide to visit Kingston. Remember me to everyone. Take Mawma up to the University. Could you get a nice book for Mr. H. and also a (?) note book unruled. I well & everyone will be so glad to see you you & M. again. Your Lolly(sp?) —Clive Marin Collection

Special to the Montreal Star—Cornwall, Ont., March 24 1913–Mr. George KERR, ex-M.P.P., died at his home at Farran's Point on Friday night, aged sixty-six. He has been ailing for a long time. Mr. Kerr was a native of Ireland. Early in life he engaged in railroading, and was one of the first conductors on the G.T.R. He was a member of the firm of Kerr Bros, who for many years conducted general stores at Farran's Point and Aultsville. Mr. Kerr represented the County of Stormont in the Ontario Legislature for one term in the Conservative interest. He is survived by his widow and two daughters, Mrs. J. Lionel HOMER and Miss Oril Kerr. —by LW

The steamer "Sirius" under the New York and Ottawa Rail Road Bridge.

In later years cargo vessels used the canal system to avoid the rapids.

The Long Sault Rapids were a natural weather break. Old-timers recall that storms coming up from the South

would meet the turbulent air of the rapids, and break up, never reaching the northern shore.

The Swing bridge at the bottom of Augustus Street has been turned to let a ship go through.

It’s no surprise that homemakers living along the waterfront and having to hang all their laundry outside,

were often heard to complain about the black smoke from the “Steamers.”

ship wishing to use the canal system. Officially 45 feet wide at the waterline, its masonry walls

shifted after construction, leaving the bottom only 43 ft 8inches. About 4 feet off the bottom

(usually where the widest part of a ship was when in the water), the width was 44 feet. "Canallers"

were therefore designed to have a maximum width of 43 feet 7 inches at the bilge line.

The Cornwall Canal was busy throughout the navigation season.

made their way along the waterway.

Photograph of the Tug Graeme Stewart in the Cornwall Canal near Horovitz Park ca 1969.